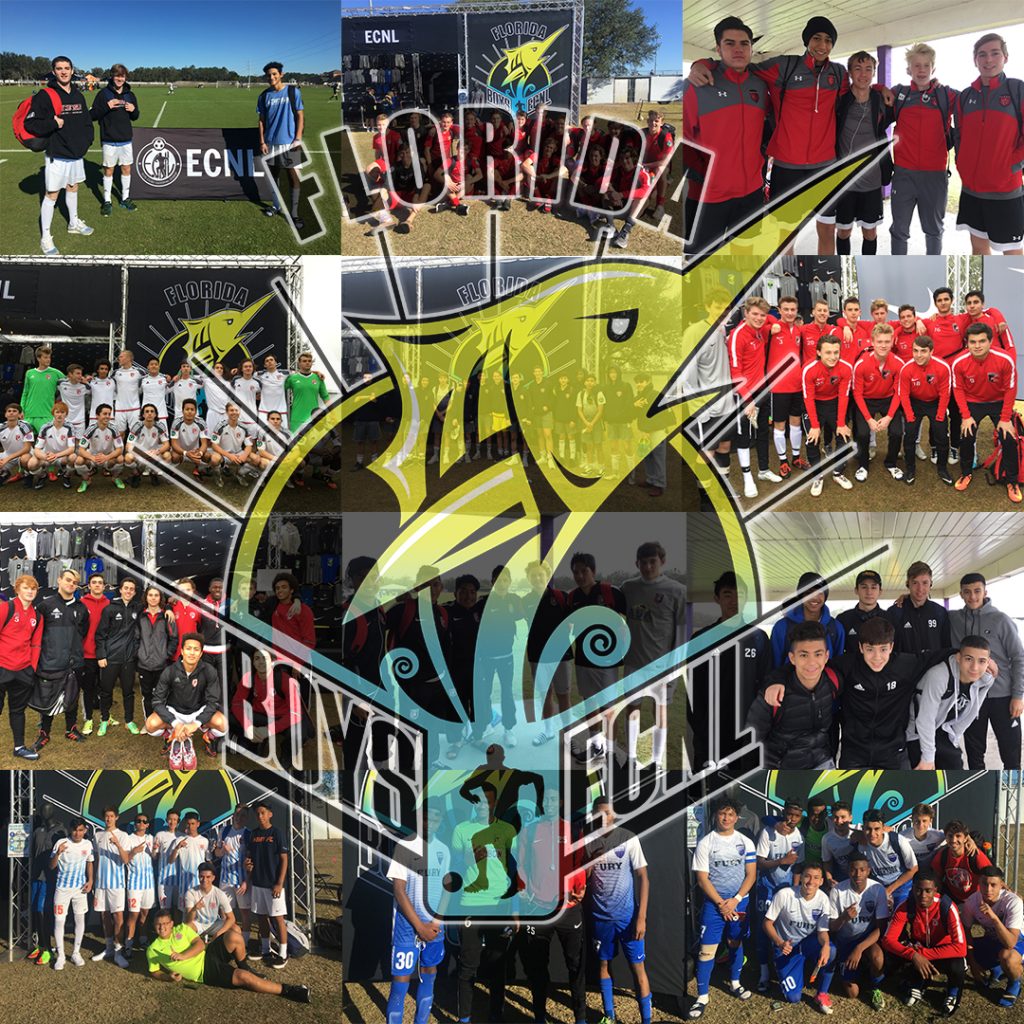 RICHMOND, VA (January 10, 2018) – The inaugural Boys ECNL Season saw another first over the New Year holiday, as the first ever Boys ECNL National Event was held in Sanford, FL from December 31st to January 2nd.  The event hosted 166 teams across the U14, U15, U16, U17 and U18/U19 age groups.  Over 80% of the member clubs were represented, with a total of 249 matches played over three days, and each team playing one game per day.

There are 3 regular season Boys ECNL National Events scheduled for the 2017-18 season, each designed to provide top-tier competition, with every team matched up against teams from other Boys ECNL conferences, and fantastic exposure to college coaches from across the country. Nearly 100 different universities were in attendance in Florida to evaluate and recruit Boys ECNL players, a huge statement for the first ever event.

“I actually love the cross over games.” said Dean Blain, ECNL Director of Tennessee Soccer Club. “Seeing first hand the different playing styles and depth of players from around the country speaks to the strength of the Boys ECNL.  The founding member clubs believe in this platform, and the ability of this league to improve development.  We are truly looking forward to what this first season brings, and what the future holds for our membership.”

Boys ECNL competition will be at full steam all over the country this spring, with clubs playing both conference and National Event games.  Qualifiers from every Boys ECNL Conference will meet up with qualifiers from National Premier Leagues at the first ENPL Playoffs in June.

Below are a few notable matchups from the Boys ECNL Florida Event.

Florida Elite SA and Penn Fusion SA battled through an intense match, with Florida Elite SA notching the only goal to earn the result.  Florida Elite SA is currently ranked 1st in the conference standings and look to continue their strong form through the spring season.

TSC Hurricanes and Match Fit Academy each currently sit in 2nd place slot in their conference standings.  TSC finished their chances well in a very competitive match to ultimately come away with a result in Florida.

Albion Hurricane is currently in 1st place in the Texas Conference, while CESA is in 5th place in the Southeast Conference.  It was a battle to the end between these two teams, with CESA finishing one chance and holding strong against Albion’s attack until the final minute to earn the win.

The oldest age group in the league did not disappoint at this event, with eight goals in this match alone.  Both Heat FC and Ohio Elite SA dazzled in the attacking third, battling to each earn a point on the day.  Heat FC is currently ranked 1st in the Southwest Conference, with a handful of conference games to play.  Ohio Elite is just beginning conference play in the Midwest, and looks to add more positive results this spring.

Good luck to all of the member clubs as they continue conference competitions, and gear up for the second Boys ECNL National Event in San Diego.

For more information on the ENPL Playoffs, CLICK HERE.

About Boys Elite Clubs National League: The Boys Elite Clubs National League (Boys ECNL) was founded to provide a top level, club-based development, training, and competition platform for youth male soccer players in the United States. The mission of the Boys ECNL is to improve the landscape for players in the United States through innovative, player-centered programming that raises standards of quality and improves the player experience in all aspects of the game.  Qualifiers from the Boys ECNL will participate in the 2018 ENPL Playoffs.  The Boys ECNL is sanctioned by US Club Soccer.