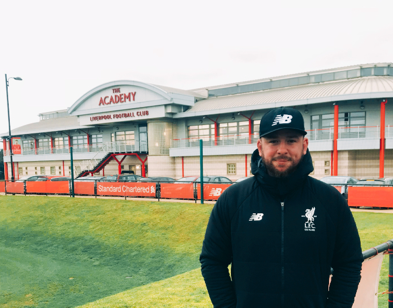 This trip is one of many events throughout the year that provides connectivity and authenticity to their partnership with LFC, and the club prides itself on representing LFC at all times with Ambition, Commitment, Dignity and Unity. LFC is recognized around the world as one of an elite group of clubs with a global reputation, and LFCIA Texas extends the LFC philosophy to create a high-level environment for the development of young players, both as footballers and as people.

LFC has a consistent tradition of developing top class players – including Steven Gerrard, Jamie Carragher, and Michael Owen – just a few of the distinguished examples of the LFC home-grown talents. The most recent LFCIA trip was an exceptional blend of sessions, observations, and classroom workshops sharing some information about how those players were developed at LFC.

LFCIA Texas believes in staying current in coaching education and utilizing the resources of their home club, and Blencoe happily traveled across the Atlantic Ocean to broaden his outlook on the game of soccer and to understand what LFC is currently implementing in the academy. Below are a few of the topics and presenters he encountered on his journey:

Blencoe’s favorite moment during the trip was the experience during the U13 Player Workshop with Steve Heighway.  During the sessions, Heighway showed clips from historic moments of specific games, asking specific players for their opinion on the footage displayed. The goal of the exercise was to teach players football concepts using a specific game moment, and later to teach them how to apply soccer tactics to life outside the game.

LFC prepares youth players to be quality members of society first and players second, reinforcing core values as the foundation. One of the unique takeaways from the trip, which speaks of the imprint LFC has made on players, is Heighway himself.  He transitioned from his prestigious career to a mentor for the youth club, staying involved for over 40 years. The passion and knowledge Heighway shares on a daily basis is infectious and is something Blencoe hopes to instill in his players at LFCIA Texas.

LFCIA Texas places a big emphasis on coaching education, recognizing that the personality, drive and commitment of individual staff is the key to success when working with players. The LFCIA Texas coaching education program not only provides fantastic content for staff, but also clarifies the responsibility each staff has to positively impact the lives of the players outside the game. The visit has already sparked excitement and ambition within the Boys ECNL teams, as fellow coaches aspire to travel next year.