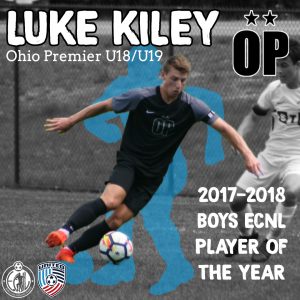 Kiley’s ability to score and consistently perform in big games in 2017-18 cemented his honor as Boys ECNL Player of the Year, as he helped lead Ohio Premier to this year’s U18/U19 ENPL National Championship.

“Luke Kiley is a prime-time player. As the stage gets bigger, so does Luke. His best performances over the last 3 years have always come on our biggest stages,” said Ohio Premier Boys ECNL U18/U19 head coach Travis Wall. “What I most respect most about his game is his ability to not let misses affect him. He’s always ready for the next play.”

The 2017-2018 Boys ECNL All-America Team includes players from every conference and 20 ECNL clubs:

“In a new platform, and on a big and new stage, these players stood tallest in the 2017-18 season, and their performances in the ECNL stood out to coaches all over the country,” said Boys ECNL President Christian Lavers. “These exceptional young players have a great future in the game, and we look forward to watching them continue to grow and shine in the Boys ECNL, ENPL, and beyond.”

About Boys Elite Clubs National League: Boys Elite Clubs National League (Boys ECNL) was founded to provide a top class, club-based development, training, and competition platform for youth male soccer players in the United States. The mission of the Boys ECNL is to improve the landscape for players in the United States through innovative, player-centered programming that raises standards of quality and improves the player experience in all aspects of the game.  The Boys ECNL is sanctioned by US Club Soccer.

About United Soccer Coaches: Founded in 1941 and headquartered in Kansas City, Mo., United Soccer Coaches is the trusted and unifying voice, advocate and partner for coaches at all levels of the game. The association provides programs and services that enhance, encourage and contribute to the development and recognition of soccer coaches, their players and the game we love. To learn more, visit UnitedSoccerCoaches.org.