RICHMOND, VA (July 17, 2018) – The first ever ENPL Playoffs brought together top boys’ teams from across the country from Boys ECNL Conferences and US Club Soccer’s NPLs into one post-season championship, ultimately crowning five teams ENPL National Champions from U14 to U18/19 this month.

A list of all teams that qualified for the ENPL Finals, and their results, is available here. 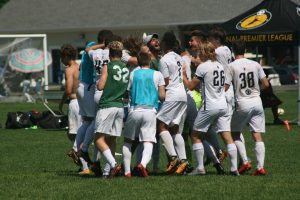 The Ohio Premier Boys ECNL U18/U19 team finished an undefeated season as they went 26-0-7 in Boys ECNL and tournament play throughout the year.

In the U18/U19 ENPL Final, Ohio Premier found themselves in uncharted territory as they conceded a goal in the first half and were behind at halftime. At the break, the coaches reminded the team that this would be their last game together and lifted the team to come out and have a great second half performance. After earning a penalty early in the second half to tie the game 1-1, Ohio Premier was able to continue the pressure that led to their 3-1 win over a great NEFC team.

“It wasn’t easy to compete in 95 degrees and high humidity five days in a row against five very good teams, but our depth and the way they’ve trained the last 6 weeks in particular are a big reason why they were able to do this,” said Ohio Premier Boys ECNL U18/U19 head coach Travis Wall about the ENPL Playoffs. “The guys were not fazed by the ‘moment’ and didn’t deviate from what has made them so successful over their time together as a club team. We scored early, we trailed early, we came from behind, we scored late…we were in a lot of different scenarios and the guys didn’t seem to ever be fazed by whatever moment they were in. They were a mature and experienced team that expected to be there and took advantage of their opportunity.” 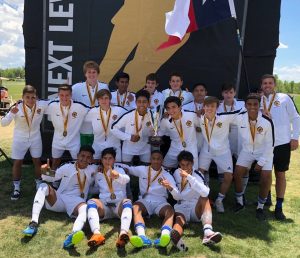 The Classics Elite Boys ECNL U17 team placed second in the Texas Conference with a 10-2-2 record and did not take the easy path to make it to the ENPL Finals. At the ENPL Playoffs in San Diego, this Classics Elite team conceded the first goal in every game they played. Despite going behind, they were able to finish each game strong, and advanced to the ENPL Finals through a penalty kick shoot-out.

At the ENPL Finals, they looked to rectify their ENPL Playoffs experience by scoring early. In the U17 ENPL Championship they played Slammers FC , who they had also faced earlier in the year at the San Diego Boys ECNL National Event. They walked away from that mid-season match with a 1-1 tie, but this match was a different tale. A strong start and an early goal paired with excellent goalkeeping was too much for the Slammers to handle and Classics Elite took home the trophy with a 3-0 win. CLICK HERE to view highlights from the match.

“This was an extremely talented group that I felt got what they deserved for the manner in which they play the game,” said Classics Elite Boys ECNL U17 Head Coach Ben Loney. “These boys have made a lot of people proud, and I hope they inspire a new generation of kids in San Antonio.” 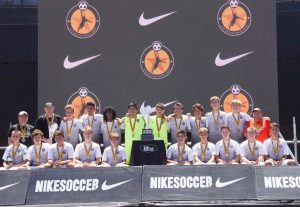 The Tennessee SC Boys ECNL U15 team had a successful season in the Boys ECNL, where they placed second in the Southeast Conference.

In the ENPL Championship game, Tennessee SC was able to control the tempo early and were defensively disciplined which made possession difficult for SAC Showcase Premier. Tennessee SC was awarded a penalty on an excellent play, which in the end was the winning goal. On the last play of the game, the Tennessee SC keeper came up with a phenomenal save to cement the 1-0 win. CLICK HERE to view highlights from the match.

“I’m so proud of the character our guys displayed in the final match,” said TSC U15 head coach and TSC Executive Director Stuart Brown.  “They were very organized and were determined to get the result.  We played a really good team in the final and knew we would need to try and get on top of the game early. We defended very well in the late stages and are deserved champions. Our players have worked very hard all year in various competitions and this is a fantastic way to complete the season.” 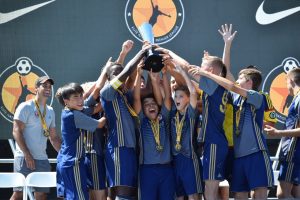 The U14 Boys ENPL Final was a battle between two very competitive Boys ECNL teams – Phoenix Rising FC and TSC Hurricane. While both teams had good scoring opportunities, the goalkeepers came up with some excellent saves and kept the game even to the very end. Playing organized defense and good possession, TSC Hurricane won the 2018 U14 ENPL Championship with a 2-1 final score.  CLICK HERE to view highlights from the match.

“The championship is a byproduct of the hard work and dedication of these kids.  These boys are resilient. No matter what was thrown at them all year, they always found a way to overcome,” TSC Hurricane U14’s head coach Christian Proto said about his championship team. “It was a complete team effort. Not only the boys, but the support of the parents, the club, and our coaching staff. I am so happy for the boys.”

The ENPL Playoffs and Finals provided an excellent competition environment for all the teams, and a strong statement about the level of play in the Boys ECNL and US Club Soccer’s NPLs throughout the country.

About Boys Elite Clubs National League: Boys Elite Clubs National League (Boys ECNL) was founded to provide a top class, club-based development, training, and competition platform for youth male soccer players in the United States. The mission of the Boys ECNL is to improve the landscape for players in the United States through innovative, player-centered programming that raises standards of quality and improves the player experience in all aspects of the game.