Matt Davison, Director of Goalkeeping with FC Stars, was the assistant/goalkeeper coach for the Virginia all-star team, and Adam Burke, Director of Coaching with Phoenix Rising FC was one of the coaches for the Arizona All-Star team.  Adam also had the privilege to coach 11 of his Phoenix Rising FC 04 ECNL Boys, 2018 ENPL National Champions, as part of the Team AZ roster of 18.

Niall Dunn, of the Phoenix Rising FC Boys ECNL team, reminisced about the intensity and competitiveness of the ICC Futures experience with enthusiasm.  “We opened up with Tottenham Hotspurs and defeated them in PKs.  We then played the Florida All-Star team and beat them 2-0.  Our last group game was against NYCFC DA, which we won 2-1! That put us in first place in our group and onto the Championship Quarterfinals, where we got to play on ESPNU live vs NY Red Bulls DA. Unfortunately, we lost 3-1, but playing on ESPNU live was very cool.”

From the coaches’ perspective, both Adam and Matt felt that the matches had a great environment and were very competitive. Looking back, Adam stated that “each game was against a very well-coached and talented team, be it an ICC State Team, one of the international teams or the DA teams.” When asked how competition in the Boys ECNL prepared the coaches for the ICC Futures event, the two coaches were very complimentary.

Matt: “Especially in the Boys ECNL inaugural year, every game you play you’re having to observe its implications on multiple levels. It’s a new and evolving environment, so clubs and coaches are having to consistently adapt their programs, on a national platform, in ways that raise the level of development and competition for the league as a whole. The league has set a standard that will highlight vulnerabilities and keep you on your toes.  I think that’s probably primarily what helped me prepare for the quick turnover in the ICC environment.  We played six different teams over seven days, with limited time and resources to prepare for the next day’s game.  Our ability to give clear, concise and useful information in night meetings or on the pitch was paramount to success.” 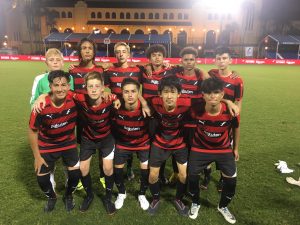 Adam: “Every competition is very meaningful in the Boys ECNL and provides players and coaches the environment to get better.  Because we had 11 of our Arizona All-Star boys also on the team in the ENPL Finals, it allowed the Arizona All-Star team to have a bit of continuity prior to arriving in Florida. For the players, the competitiveness of each ECNL league game throughout the year provided the intensity and spirit of the game to keep them developing in the direction we wanted.”

Josh Martinez, who was one of two Phoenix Rising FC Boys ECNL and ICC Arizona players selected to the all-tournament team, echoed his coach’s statement fully: “Each game, regardless of the score line, was intense and felt like a final/championship match.”

Matt Davison also had an opportunity to observe some things specific to the goalkeeping position and coaching goalkeepers: “I thought the level of goalkeeping at the ICC was very good,” Matt states. “In observing as many goalkeeper warm-ups and performances as I could, I noticed that when there were goalkeeper mistakes, they were the same mistakes that I see from my own players in the same age groups.  What I mean to say is, whatever difference in technique or nuances being taught around the world, 04’s (from anywhere) still make 04 mistakes, primarily with regard to decision-making, rather than technique.” 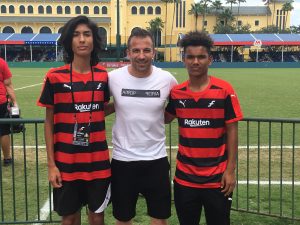 When asked about lessons to take from the ICC Futures experience back to his own daily soccer environment, Kevin Mearse, another all-tournament selection player from Phoenix Rising FC and the Arizona All-Star team, stated without hesitation: “To take every practice and game as an opportunity to get better and don’t settle because that is the standard.”

About Boys Elite Clubs National League: Boys Elite Clubs National League (Boys ECNL) was founded to provide a top level, club-based development, training, and competition platform for youth male soccer players in the United States. The mission of the Boys ECNL is to improve the landscape for players in the United States through innovative, player-centered programming that raises standards of quality and improves the player experience in all aspects of the game.  The top Boys ECNL teams qualify for the Elite National Premier League (ENPL) Post Season. The Boys ECNL is sanctioned by US Club Soccer.

#NEXTUP – THE SECOND SEASON OF BOYS ECNL KICKS OFF