RICHMOND, VA (January 30, 2019) – The third annual Elite Clubs National League Coaching Symposium was held at the ARIA Resort and Casino in Las Vegas, NV from January 26-28 with nearly 200 coaches from across the United States in attendance. The event was co-hosted by the Boys ECNL and Girls ECNL, and was open to coaches from inside and outside the league.

The three-day event featured a world-class lineup of presenters: 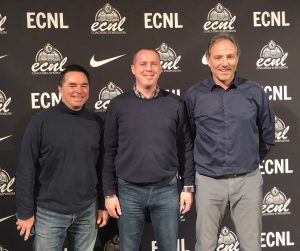 Kris Van Der Haegen, Director of Coach Education of the Royal Belgian Football Association, a member of the JIRA Panel advising UEFA and UEFA’s member associations on coaching education, and the assistant coach for the Belgian Women’s National Team;

Fergus Connolly, one of the world’s leading experts in team sport and human performance who has worked in professional football, soccer, rugby and with special forces in multiple countries, and the author of the highly acclaimed books “Game Changer – The Art of Sport Science” and “59 Lessons – Working with the World’s Greatest Coaches, Athletes and Special Forces,” and

The Symposium began Friday morning with Van Der Haegen presenting on the vision of development of the Belgian FA, where he elaborated on the process undertaken to create a unified vision between clubs (grassroots and professional) and the FA, as well as the key concepts and methods in the vision from a teaching and soccer perspective.

Tom Byer followed with a presentation on development at the youngest ages, reminding everyone of the simple message that football starts at home: children fall in love with the ball first, and then the game.

The afternoon featured Fergus Connolly discussing Lessons in Leadership based on his vast experience working with top coaches around the globe, in multiple sports and professions. Day one concluded with a roundtable discussion with all three presenters, moderated by ECNL President Christian Lavers. The discussion brought together many perspectives from earlier in the day, allowing everyone to elaborate on some topics and contrast their ideas on others.

On the second day of the Symposium each presenter dove deeper into the areas of their expertise. Byer kicked off the day with a discussion on the role of culture and media in sport development, which was followed by a lecture on modern training methodology by Connolly where he highlighted similarities between training philosophies across elite teams in sports.

Van Der Haegen returned to open the afternoon with tactical lessons from the Men’s World Cup in Russia 2018, showing game video to highlight his points. Connolly then followed with thoughts on best practices in coaching, culture development, and coaching philosophy.

The final day saw each presenter a final time, beginning with Connolly and his thoughts on elite performance environments. Byer shared insights on the evolution of women’s soccer programs in Japan, with Van Der Haegen closing out the weekend with a discussion on methodology with respect to rondos and positional play, and video showing the core principles of the Belgian national teams in action.

Overall, the ECNL Coaching Symposium combined thoughts and perspectives of three world-renowned presenters to provide an incredible opportunity for coaches to assess their own methods and philosophies in comparison to some of the best in the world.

“The 3rd ECNL Coaching Symposium met and exceeded our expectations in every way, from the incredible quality of the facilities at the ARIA to the fantastic information and thoughts shared by each of our presenters” said ECNL President Christian Lavers. “We look forward to next year’s event, and to continuing to bring uniquely qualified leadership and development experts to help the league and our clubs continue to raise the bar and improve programming and player experience.”

About Boys Elite Clubs National League: Boys Elite Clubs National League (Boys ECNL) was founded to provide a top class, club-based development, training, and competition platform for youth male soccer players in the United States. The mission of the Boys ECNL is to improve the landscape for players in the United States through innovative, player-centered programming that raises standards of quality and improves the player experience in all aspects of the game. The Boys ECNL is sanctioned by US Club Soccer.

About Girls Elite Clubs National League: The Girls Elite Clubs National League (Girls ECNL) was founded in 2009 to enhance the developmental experience of female youth soccer players in the United States through: (i) improving the competitive environment through creation of a true national competitive league; (ii) improving the process for identifying elite female soccer players through a systematic scouting and identification program based on national competitions; and (iii) improving the daily training environment at top female youth soccer clubs through developing best practices and training and organizational guidelines for its member clubs. The ECNL is sanctioned by US Club Soccer and is sponsored by Nike Soccer.

ECNL Presents at the United Soccer Coaches Conventions: Training The Best to Be Better