History was made Sunday at WorldWide Technology Park in St. Louis, MO, as the ECNL Boys awarded the league’s championship trophies in its first postseason in history. Sunday was the championships for the U15 and U14 age groups, while the U17s and the U16s will be handed out Monday morning after awarding the U13 and U18/19 championships in Greensboro, NC. It was a fantastic day for the league, one that had been in the works for years.

Below is how each championship was won and which club was able to lift the ECNL Boys trophies after capturing the first title in league history.

Battle of the Carolinas

The U15 National Championship pitted CESA against Charlotte SA, a battle between North Carolina and South Carolina, with the winner getting silverware and bragging rights.

Following the scoring chance, Charlotte SA slowly overtook possession and started applying pressure, earning multiple free kick opportunities. Charlotte continued knocking at the door until finally breaking it down in the 35th minute. Off a corner kick, the ball bounced around in the box before popping into the air, where Gavin Trosch knocked a header across the goal line to take a 1-0 lead. That goal allowed was the first for CESA during its entire playoff run to the National Final.

Charlotte SA carried that 1-0 lead into halftime, and that’s when Head Coach Victor Pace ignited his club with mid-game adjustments.

“We hadn’t been scored on our whole run, so I think that goal woke us up a little bit,” said Victor Pace, CESA Head Coach. “We changed our formation in the midfield to try and get on top of them a little bit, and it changed the game for us. We started to get some chances, and then that belief came back.”

Coming out of the break, Pace’s adjustments immediately played dividends. CESA earned another close-range free-kick, but the team put the shot wide. Not to be discouraged though, forward Brando Bedolla evened the game up in the 62nd minute.

Bedolla earned the ball and went one-one-one with a Charlotte SA defender, when he cut into the middle, creating just enough space to get a shot off. His shot beat the outstretched goalkeeper to level the game at 1-1.

Five minutes later, Bedolla did it again. Once again, Bedolla won a free ball, and as soon as he had possession, he crashed the box and snuck a shot under the charging keeper to make it a 2-1 contest.

“After that first goal, we had the momentum,” Bedolla said. “We had to get that second one, and we did.” 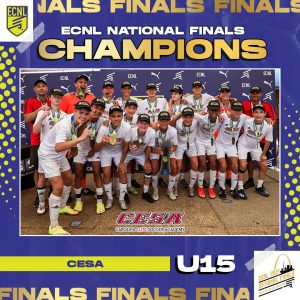 For the final minutes of the contest, CESA continued to attack, not allowing Charlotte to generate many chances, while its backline also suffocated the North Carolina attack whenever the ball passed midfield.

Finally, the end whistle blew, and CESA not only earned the first-ever ECNL Boys U14 National Championship, but its first piece of hardware as a club, ever.

“Charlotte SA, they’re a really tough team,” Bedolla said. “They’re really good competition. They were eating it up in the first half. It was a competitive game against a great team.”

“I’ve had a lot of personal accomplishments as a player as a coach, but this win ranks right up there,” Pace said. “It was a tough grind for us to get here and now, it just feels awesome. Charlotte’s a great team. They went undefeated this year and they’re a common opponent for us.

In the U14 matchup between San Diego SC and Crossfire Premier, it was a story of quick starts, solid defense and intense battles up and down the pitch.

Just minutes into the match, Crossfire Premier jumped out to a 1-0 lead. The Crossfire Premier offense capitalized on a missed pass out of the back, and connected a pass into the box for Kelvin Luis, who had an easy poke across the line for the score.

Building off their early tally, Crossfire Premier continued to create scoring opportunities for the Seattle squad, but San Diego refused to allow another. And aided by its backline play, San Diego SC started to get more and more chances, culminating with a dangerous set of passes that forced a major save from the Crossfire Premier keeper.

Crossfire Premier held its 1-0 lead at the half and then just minutes after the restart, the team doubled its advantage. Once again converting off a miscue from the San Diego defense, Luis stole the ball at the edge of the box and sent a clean volley to the back post for the score.

“The honest truth is I didn’t speak to them before this game,” said Tony Leatherman, Crossfire Premier Head Coach. “They did their own huddle and relayed the message they wanted to send. That was them. At halftime, I talked to them about a couple of tactical things, but that was it. We feel like the responsibility is theirs and they accept the responsibility. And I think you saw that with the way they came out to play today.”

Starting to mount a comeback, San Diego SC pulled within one, finding the back of the net in the 57th minute. Now with momentum, San Diego aimed to pull even. But the Crossfire Premier backline kept their opponents at bay, limiting the dangerous chances to maintain its lead. 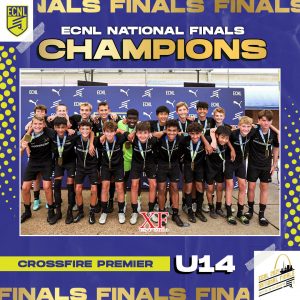 “We knew it was going to be a tight game, even when we went up 2-nil,” said Tony Leatherman, Crossfire Premier Head Coach. “We knew they could come back, they have those types of players. They made it super interesting in the end. But I will say one thing about this group, the thing that really sets them apart is they just find a way, no matter what. They find a way. They have a special knack to always come out on top and I’m very happy for them today.”

Luis’s two goals were his fourth of the National Finals. He was the best player on the pitch, and he did so while playing a year up.

“It feels great to just see all of these guys play and be able to join them out on the field,” Luis said. “It’s really good for me. We’ve all been together for a while too, so to win this championship with them, it’s amazing.”

ECNL BOYS NATIONAL FINALS DAY 5: WE ARE THE CHAMPIONS