FC Wisconsin’s U17 kicked off its playoff slate with a contest against Florida West Saturday afternoon and by the time the final whistle had ended, Denis Krioutchenkov made a big statement with his play.

After neither side found the back of the net in the first half, Krioutchenkov took over the game in the second half. 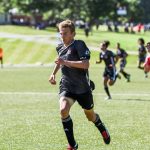 First, he opened the scoring in the 50th minute, putting a shot past the Florida West goalkeeper to make it a 1-0 game. He then doubled FC Wisconsin’s lead just one minute later, beating the netminder again to give his team a 2-0 lead.

In the 60th minute, Krioutchenkov crashed the back post for an easy tap-in for a third tally.

A stellar stretch of play.

“At halftime, Coach told us that we had to come out strong,” Krioutchenkov said. “That’s what the whole team did. They set me up with chances and I was able to finish them.”

Not content with just three goals, Krioutchenkov added a fourth in the 86th minute just for kicks, as FC Wisconsin cruised to a 4-1 victory.

Krioutchenkov did just that Saturday afternoon.

To view the complete scores and schedules for the ECNL Boys National Playoffs, click here.