All It Takes Is One

The first semifinal pitted the top-seeded FC Dallas against the No. 5 San Diego Surf with a spot in the U18/19 Final on the line. It was a back and forth affair, featuring just one goal to decide who moved on and who was headed home.

From the opening whistle, both sides pushed hard to get the upper hand. Early in the half, FC Dallas earned a corner kick. The team put a nice ball into the box, but Surf neutralized the threat before a scoring chance could occur.

Sensing an opportunity, FC Dallas continued to push numbers forward, searching for the opening goal, but each time, the Surf defense denied their attempts.

Heading into halftime, the score remained 0-0. But neither side was discouraged and came out with even more fire.

Finally, Surf broke through to take a 1-0 lead.

Oliver Padilla took a shot from the top of the box, but the FC Dallas goalkeeper hit the grass to make a save. Before he could corral the rebound though, Andrew Mitchell pounced on the loose ball and poked it over the goal line for the score.

Following the goal, FC Dallas doubled its efforts to find an equalizer, coming in waves trying to even the score. But the Surf back line refused to give in, thwarting every scoring chance.

Surf nearly doubled its lead late in the half, but a rocket just soared over the crossbar. Realizing time was winding down, FC Dallas put its best effort in the dying minutes to push the game into penalty kicks, but could not solve the Surf goalkeeper. 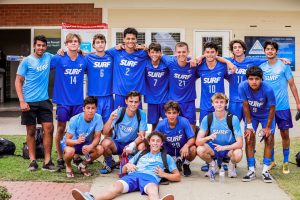 One goal was enough, and it belonged to San Diego Surf. They knocked off the No. 1 seed and were now just one win away from a national championship.

“It’s really special, making it to the Final,” said captain Josh Kenworthy. “I’m really proud of this team. We’ve battled a ton of adversity – injuries, cancelled practices, games – so to make it here through all of that, it’s really special.”

“To piggyback off what Josh said, there’s a lot of guys back home who would love to be here,” said Head Coach Benoit David. “We do it for them and we obviously do it for the parents in the stands too. We’ve come a long way but we’re not done yet. We’ve got one more to go. ”

The other U18/19 semifinal matchup saw the No. 7 Charlotte Independence face off against the No. 6 FSA. Both teams won previous games both as a favorite and as an underdog on its quest for a national championship, and now they were just one game away.

From the opening kick-off, it was all Charlotte Independence. Just minutes into the contest, the Independence found the back of the net to take a 1-0 lead. In quick succession, the team continued to generate scoring chances. After a shot went wide, Charlotte added its second tally of the game to double its lead to 2-0.

Before halftime, Charlotte increased its lead to 3-0 and were firmly in the lead as the teams came out for the second half.

FSA knew it was a tall task, but you have to score one goal before you can score three, and went about chipping away at Charlotte’s lead. The team put numbers into the box and were finally able to score, cutting the Independence’s lead to 3-1.

Both teams traded chances as the half continued to wind down, and Charlotte was able to add two more goals before the final whistle, moving on to the U18/19 Final in convincing fashion.

“It was a lot tougher of a game than the score indicates,” said Coach Jeff Bilyk. “I’m super proud of the boys, they deserved it. And FSA, they’re a great team, they played us really well. We played an unbelievably great game today and proud to be headed to the Final.”

“We said before the game, we have a purpose; we’ve been grinding all year,” added midfielder Jefferson Amaya Figueroa. “We came out strong, fought together as a team and that wall. We stuck together, we’re a family, and the rest will come.”

To view the complete scores and schedules for the ECNL Boys National Playoffs, click here.